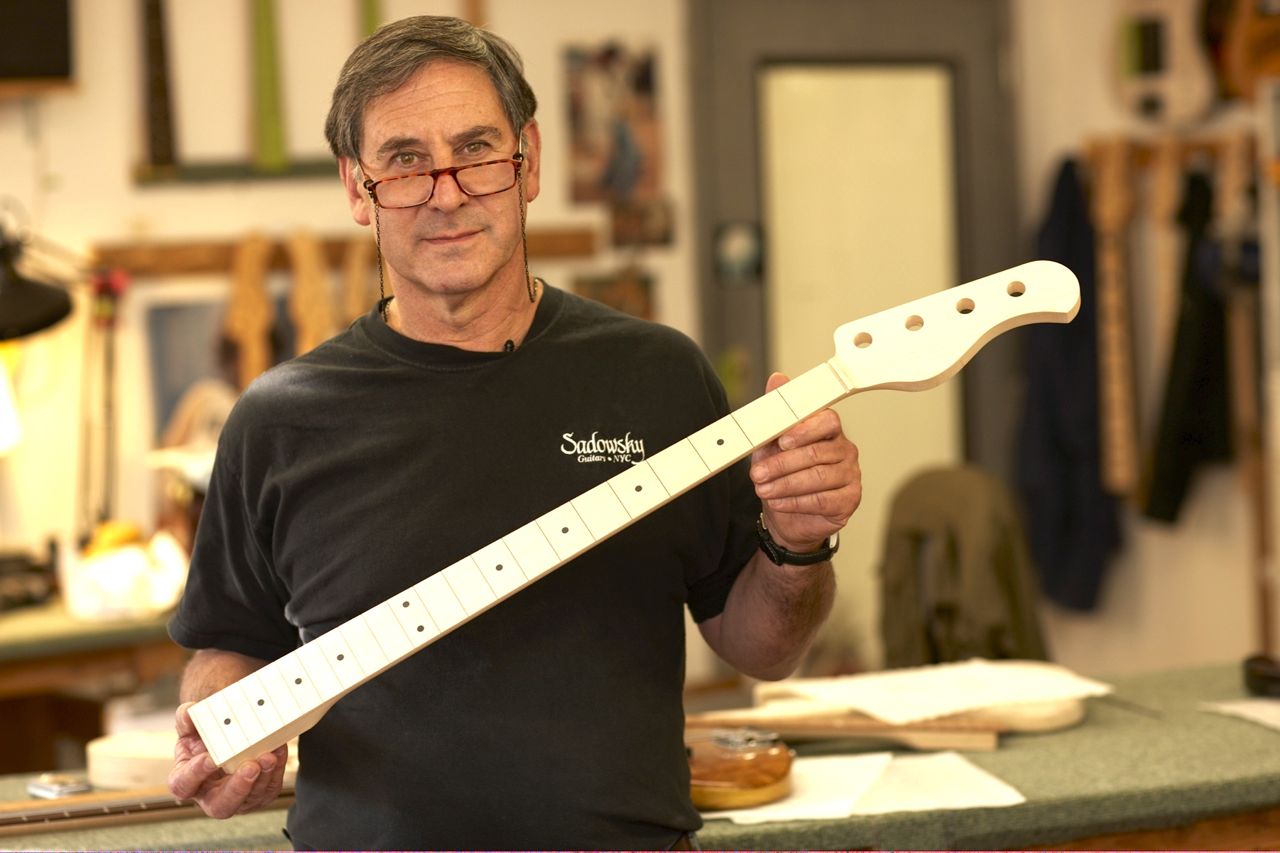 Roger Sadowsky is one of the most highly respected instrument makers in the world. His instruments are played by many of the world’s greatest artists including guitarists Jim Hall, John Abercrombie, Pat Metheny, Lee Ritenour, Chuck Loeb and bass players Marcus Miller, Will Lee, Rickey Minor, Michael Rhodes, Verdine White and Jason Newsted.

Roger grew up in New York City in the 1950s with a Dad who listened to Frank Sinatra and Nat King Cole, and a Mom who loved listening to songs from Broadway
musicals. He began playing guitar in the spring of his junior year in college, learning to fingerpick by playing Gordon Lightfoot and Paul Simon tunes.

While working his way through a PhD program in psychobiology at Rutgers University, Roger became friends with a group of professional folk musicians and immediately admired their wonderful vintage Martin guitars. He soon became obsessed with the guitar and began writing to guitar makers all over the world to seek an apprenticeship. A year later, he left his PhD goals behind and began working with luthier Augie LoPrinzi building acoustic guitars in New Jersey.

After two years with LoPrinzi, Roger took over a well-known guitar repair shop in Philadelphia where he spent the next five years gaining a reputation for outstanding repair and restoration work on guitars and basses. In 1979, as a direct result of his increasing reputation, he moved back to his hometown of New York City to serve the repair and restoration needs of the city’s top studio players.

Soon after Roger’s return to New York, a friend introduced him to Marcus Miller. Marcus brought his 1977 Fender Jazz Bass to Roger with one request: “Do whatever you can to make this the best bass it can be.” Roger told Marcus that he would install a pre-amp he had just started working with, shield the electronics, install an upgraded bridge, refret the instrument and set it up to Roger’s exacting specifications. The legendary “Sadowsky Sound” was born. Roger soon provided the same services for another rising New York player, Will Lee of the newly formed David Letterman Band.

In those early years, working musicians would approach Roger wanting advice on getting a good guitar or bass. He would have them buy an early-’60s Fender, which at the time could be purchased for about $800. They would bring those instruments to Sadowsky Guitars, where Roger would do his magic. At the end of the day, for the reasonable sum of around $1,300-$1500 (including the purchase price of the instrument), Roger would provide to them a first-class instrument.

In the early 1980s, with a heated vintage market increasingly pushing guitars and basses out of reach for working musicians, Roger realized that it would make more sense to simply build an instrument from scratch that incorporated everything great about a Fender bass, plus everything his valued improvements brought to the table. His background in acoustic guitar building helped him to build a lightweight, acoustically resonant instrument. His studio-proven expertise in shielding and hum cancelling technology produced instruments that were significantly quieter than many others on the market. And his longstanding reputation for employing only the highest quality materials and workmanship resulted in the creation of superior instruments.

Guitarists also received the significant benefits of Roger’s success in bass building. In addition to creating a very popular line of chambered solidbody guitars, including an especially renowned Electric Nylon guitar, he developed a very special line of archtop hollowbody and semi-hollowbody electric guitars. These instruments have become standards in the industry for superior tone, feel, playability and especially value.

Notwithstanding his increasing success in the marketplace, Roger maintains his commitment to staying small and wanting to primarily sell directly to the working musician rather than to music stores. He enjoys dealing personally with the player and seeing the entire guitar building process through from design to completion. And after many decades of producing some of the world’s most coveted instruments, Roger’s greatest joy continues to be witnessing the complete satisfaction a customer receives when making music with a Sadowsky instrument.